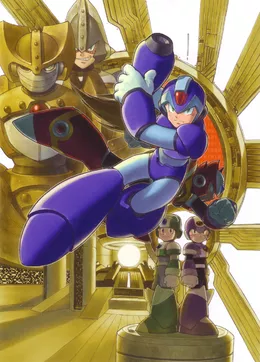 "In order to put the past data back, we need to fix a data in the "core" of the Mother Computer... But the way to the core is "protected." Unless you clear the protection, you can't enter the core. The guardians of the protection is the boss data of the past."
— Middy, Mega Man Xtreme.
Advertisement:

Mega Man Xtreme is the first in a handheld spin-off of the Mega Man X series, and was released on the Game Boy Color on October 2000 in Japan, January 2001 in North America, and August 2001 in Europe. Chronologically it takes place between the events of Mega Man X2 and Mega Man X3, and includes enemies from the first two X games. It was rereleased on the 3DS Virtual Console in 2013 in Japan and 2014 in other regions.

In the year 21XX, the Mother Computer of the Maverick Hunters’ headquarters is hacked by an unknown source, scrambling the Hunters' networks and causing worldwide chaos. Resident computer genius Middy offers to transmit X into the Mother Computer to fight his way through the hacked data and find the culprits in person, while Zero deals with the Maverick riots in the real world.

As X fights data of past Mavericks within cyberspace, he meets the Shadow Hunters and discovers that they are working with Middy's twin brother, Techno, to pull off the hack. However, it also turns out someone else is pulling their strings behind the scenes...

This game was later followed by a sequel, Mega Man Xtreme 2.