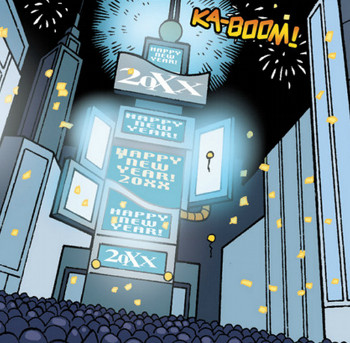 And the previous year was 200X.
"Why is it always X? It's like they couldn't come up with an exact year, so just make it X."
— The Angry Video Game Nerd
Advertisement:

Setting is important in storytelling, especially when you want to tell what time period that story takes place in. The easiest way to do this is to simply state what year the story takes place in... However, being too exact may sometimes narrow down flexibility. So in order to pinpoint the time and keep it vague at the same time, writers like to give the century number, but replace the year and decade with X.

It also renders the setting somewhat resistant to the flow of Real Life time, since Real Life will take longer to cross that date and make fans start wondering why the future doesn't look anything like fiction depicted it. Of course, as the list below shows, years like 199X and 200X have been used and passed, and even 20XX will pass eventually. Inevitably, Time Marches On.

Commonly seen in Science Fiction, but not limited to it. It is for example popular in older English literature as well, sometimes to add an air of realism to stories, as if to protect the characters' identities. Note that older examples such as Frankenstein or Treasure Island use — instead of X to denote the uncertain years: Both of the above works are set in "17—".

Not to be confused with Exty Years from Publication, which is about future dates or intervals being nice round numbers, often based on the work's own release date. Compare Spell My Name with a Blank, which is similar but with names or locations.