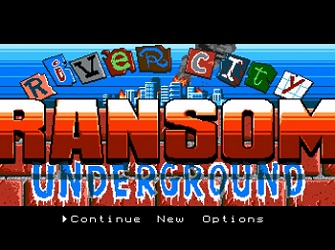 River City Ransom: Underground is a video game developed by Canadian game studio Conatus Creative with the help of Kunio-kun creator and Double Dragon director Yoshihisa Kishimoto. The game is a sequel to the 24 year-old game River City Ransom. The project was first put on Kickstarter on September 9, 2013 and received a total of $217,643 by October 9, 2013.

20 years after the events of the original game, where our heroes, Alex and Ryan, defeated the sinister gang leader Slick on the River City school rooftop, a new crop of fighters known as the Flock must take to the streets to clear their name in a sinister kidnapping plot, and along the way the duo help them defeat the various gangs of River City.