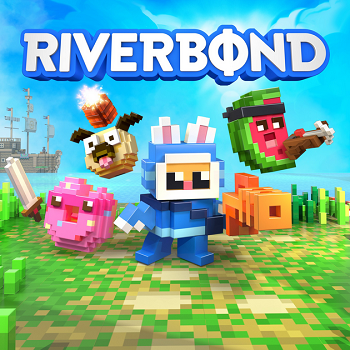 Riverbond is a Retraux Action-Adventure Dungeon Crawler with 3D voxel graphics, four-player co-op support and an irreverent approach to its setting. It was developed by Cococucumber and released on June 9th, 2019 for Xbox One, PS4 and for PC through Steam, with a Nintendo Switch version following on December 10th, 2019.
Advertisement:

The game is very much straightforward; pressing play immediately allows you to choose which of the eight short worlds (nine after it was updated for a Switch release) you intend to tackle, with no intro cutscenes or any other hint of an overarching story. The combat is equally simplified, with a notable lack of RPG Elements of any kind: only the weapon you currently wield makes a difference to the proceedings.