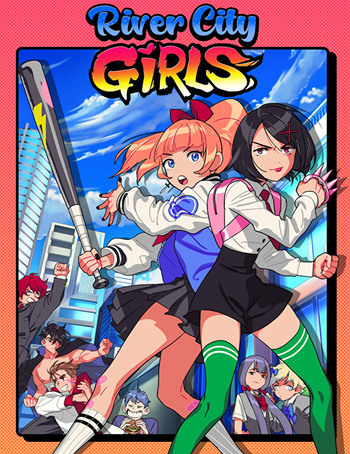 Ya got trouble! Trouble in River City! Trouble with a capital T and that rhymes with G and that stands for girls!
We're gonna fight you
With all our might to
Get back our boyfriends
We love them so!
We'll take the world on,
And sing this dope song!
Don't mess with us, we're the River City Girls!
The Expository Theme Tune
Advertisement:

It seemed like an ordinary peaceful day in River City High to Misako and Kyoko, two street-tough high-schoolers, until they hear some shocking news: their boyfriends Kunio and Riki, the toughest, baddest guys in the town, have been kidnapped. Now they must fight their way through the regions of River City to get them back, encountering an assortment of strange villains along the way.

The 2019 entry to the Kunio-kun series developed by WayForward Technologies, River City Girls is a departure for the franchise. Besides starring the heroines (a callback to the 1994 SNES game River City Girls Zero) and using a new graphical style, it fuses the original's Japanese setting with Western tastes to create a distinct Americasia outlook. It follows the open-world system in River City Ransom, but not without new gameplay additions. Perhaps surprisingly, it only has English voice acting, even though it's still published by Arc System Works that currently owns the rights to the series. It was released for Nintendo Switch, Xbox One, PlayStation 4, and Microsoft Windows.

A sequel, River City Girls 2, was announced in June 2021, with WayFoward Technologies returning to develop, and slated for a Summer 2022 release. Added to the playable roster of the sequel is Marian from Double Dragon and Provie from Underground.