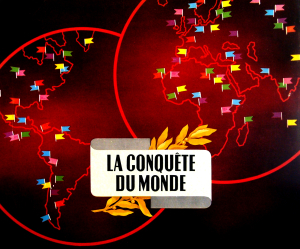 "Second World War, Russian front, not a good idea... Hitler never played Risk when he was a kid...! Because, you know, playing Risk, you could never hold onto Asia — that Asian/Eastern European area? You could never hold it, could ya? Seven extra men at the beginning of every go, but you couldn't fucking hold it. Australia, that was the one, Australia — all the purples, get everyone on Papua New Guinea and just build up and build up..."
—Eddie Izzard

Risknote - first released in France in 1957 as La Conquête du Monde ("The Conquest of the World") before being bought by Parker Brothers and released worldwide in 1959 - is a classic board game centred around commanding armies on a map of the world. The game starts with the random division of the world among up to eight players. Armies are gained according to how much territory each player has, whether they control entire continents, and special cards drawn from a deck. The object of the game is to control the entire world. Risk has been around for a long time and has many, many spinoffs and expansions. See Themed Stock Board Game.

One especially-interesting spinoff is Risk Legacy, which involves permanent changes to the game board during gameplay, leading to a unique experience for each session.