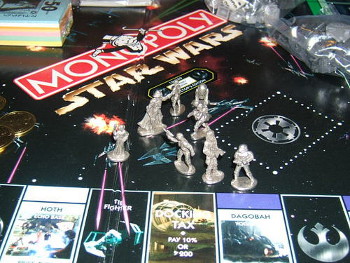 "No, you can't play as the race car!note Since that would be the speeder bike, but that's not a playing piece.
Advertisement:

When a franchise becomes popular, companies often like to cash in with The Merch. One option, if your franchise is big enough, is to team up with the companies that make board games, to make a special themed version of an existing game—typically a well-known game, like Monopoly or Clue(do) or Risk. It's a guaranteed sale to the hard-core collectors of the show's merch and of the game, and it's also a likely sale to fans of the show who happen to like the game. Everybody wins.

The most commonly themed stock board games are: chess, Monopoly, Clue (aka Cluedo), Risk, and Stratego.

In most cases, the theme is only skin deep. The pieces may look like the show's characters (in chess, this is usually the only change), the squares on the board may be renamed, and the cards may have new artwork, but all have basically the same value and serve the same purpose as in the original game. In a few cases, new rules may be added to the game to reflect the theme, making a somewhat new game. This is particularly common with versions of Risk, which usually also have all-new maps. If you add an example of a game that has new rules, please feel free to mention that fact.

There are also now a few Themed Stock Card Games, listed below under "Other" for completeness.

Subtrope of The Merch. When they make a whole new board-game instead of recycling an old one, that's The Board Game. Also see Licensed Game (for video games), Licensed Pinball Table, and Themed Tarot Deck. Compare Digital Tabletop Game Adaptation.