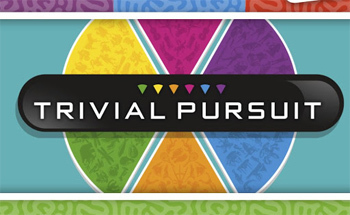 The quintessential board game used in television to indicate, first, a test of skills among characters to see which one is the smartest, and second, an excuse for hilarious bickering as players argue over whether someone is winning because he's actually smarter or because he's getting ludicrously easy questions. In shorthand, while many board games are treated as luck-based missions for which the winner is of little ultimate consequence, Trivial Pursuit will be a matter of Serious Business. The irony will not be lost on those who realize that the game's title is a pun on the old expression "trivial pursuits"; i.e, pointless adventures that never accomplish anything.

The rules to this game are almost always irrelevant in terms of its use on television, but for what it's worth, the object is to collect six different colored wedges, each color corresponding to a different general interest category, and put them into the player's game piece, a wheel. Because of their shape, the wedges are often referred to as 'pieces of cheese' or 'pie pieces'. After collecting all six colors, the player must journey to the center of the board for a final question in a category chosen by the opponents. A correct answer wins the game; otherwise, rinse and repeat.

The popularity (and nature) of this game is also such that it shows up semi-regularly as a Game Show. To date, different versions have appeared in the United States (one version from Jay Wolpert in 1987 didn't make it to series; the others were a series on The Family Channel, produced and hosted by Wink Martindale from 1993-94 with call-in components, and Trivial Pursuit: America Plays, a series from 2008 that utilized people and webcams to record questions), the United Kingdom (a carbon copy of the Martindale series, also produced by him and aired on their Family Channel equivalent, now Challenge TV), and Spain. A new iteration, produced by Hasbro and Entertainment One and hosted by LeVar Burton, was announced in 2021. There is also a 1980s arcade game by Bally Sente.

This board game includes examples of the following tropes:

This board game has been a plot point in the following shows: