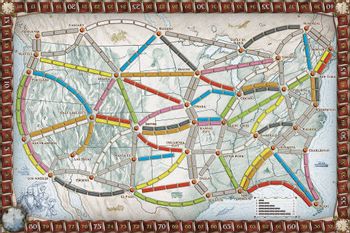 Singing that song is optional.
Ticket to Ride is a board game produced by Days of Wonder. The premise is that you are travelling the United States by rail as part of a wager. All five players are in competition to claim the most and longest railroad tracks, and visit the most cities.
Advertisement:

The board has several major cities and hubs as railroad destinations. Each player draws 3 ticket cards at the beginning of the game. Each ticket depicts two (or more) map destinations which needs to be connected at the end of the game. Gameplay is accomplished by doing one of three things, drawing up to two train cards, drawing new tickets, or playing train cards. When you play a set of train cards, you may then place a number of your wagons on the board on a route of the same color and length as the set of train cards you played. On gray routes, cards of any one color may be used. Locomotives may be used as wild cards instead of any color. Some maps limit the use of locomotives, and some of them require you to use locomotives on certain routes. When you place wagons on the map, you receive a number of points depending on the length of the route. When a player has used up their allocated 45 wagons (for most large maps, but variations exist including 15 vehicles for the mini games), the game is over.

At the end of the game, the tickets are added up. Each ticket is worth a certain amount of points based on the distance between the destinations on the card if the player has managed to build an unbroken line of wagons on the board between the destinations. Failing to complete a ticket in the above manner results in the ticket being worth negative points instead. Bonuses can also be gained, depending on the game, for making the longest train or having the most completed ticket cards. Some expansions also have other types of bonuses at the end. The person with the most points at the end is the winner.

There are Expansion Packs for the game. These include new boards and gameplay mechanics for Europe, Germany, Switzerland, the Nordic countries, India, Asia, and Africa, as well as card and mechanic expansions for the USA and Europe editions.

Tropes appearing in Ticket To Ride: