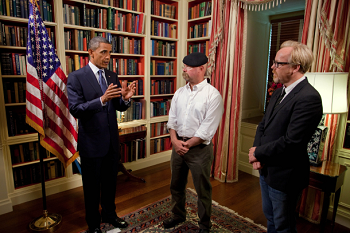 "Well I can take a joke just so far, but I won’t have this high office ridiculed. I won’t be stumbling around, making a fool of myself, for some late night comedy show."
— President Gerald Ford (while stumbling around), Saturday Night Live, April 17, 1976
Advertisement:

This is going to be a special episode. This is going to be a Pilot, Pilot Movie, Grand Finale, Origins Episode, Reunion Show, or maybe even a Very Special Episode. Or a regular episode, in which we want something that will make it special. We need a guest star, but not any guest star. And not another episode where Metallica's in town. We need someone real big, like, like...like the president of the United States! Or Russia! Or the British prime minister! Maybe even a member of the Royal Family! Or the Pope! No matter — he just needs to be a well-recognized political or religious leader. If he's popular, his face itself will earn thousands. And if for some reason people don't like him, we‘ll just chip with him, and they‘ll love us. It doesn't matter if the whole story revolves around about him, or he makes only a short appearance, if at all — it will work perfectly.

Compare Our Presidents Are Different.

open/close all folders
The actual politician, in person
Just the politician's likeness
Feedback