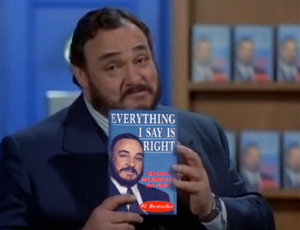 I could not dig, I dared not rob
Therefore I lied to please the mob.
— Rudyard Kipling, "A Dead Statesman"
Advertisement:

A loudmouthed political talking head whose views tend toward radical right-wing (or, less commonly, left-wing) political positions often to the point of the Boorish style of Eagleland (even if he isn't actually American). A gadfly to any form of political compromise with what he sees as socialist or libertarian causes.

This is one of the newer political tropes, one which seems to have come to prominence in The '80s and The '90s after a combination of the FCC scrapping the Fairness Doctrine

, and the increasing popularity of cable television, which isn't beholden to FCC rules, led to a rise in prominence of right-wing punditry in American media. It's usually a parody or satire of these types, and the right-wing version is probably more common. Many examples are explicit parodies of specific figures, like Rush Limbaugh, Glenn Beck, or Alex Jones. The Trope Maker was ABC's coverage of the 1968 US presidential elections, when ABC executives wanted a low-cost way to stand out from conventional election coverage — in this case, the hiring of political polar opposites Gore Vidal and William F. Buckley, Jr. to take part in a series of debates. The relationship between Vidal and Buckley was covered in-depth in the documentary Best of Enemies.