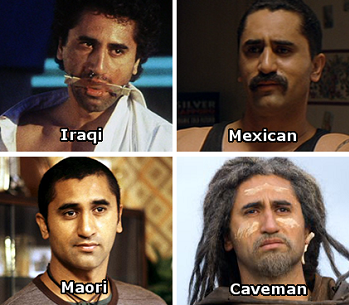 Guess what his real ethnicity is.note It's Māori. And if you picked "caveman", you get a Dope Slap. Clockwise from top left: Three Kings, Training Day, 10,000 BC, and Whale Rider.
"I never get the girl. I always get the country."
— Attributed to Anthony Quinn
Advertisement:

This refers to casting practice, and in the case of Trope Codifier Peter Stormare it has even achieved the status of Casting Gag. It refers to "international" or "ethnic" - at any rate not American or British - actors who are considered to somehow look or be able to act so vaguely but conspicuously foreign that they can be used for any nationality. It's As Long as It Sounds Foreign and Gratuitous Foreign Language applied to casting. However, But Not Too Foreign is often in effect because you'll want someone who speaks good English (even though intentionally accented) and rather panders to viewers' expectations than give an accurate portrayal of a specific ethnic identity which also means that the character's background might be very vague as long as it's foreign. Note that Plays Great Ethnics can have the same Unfortunate Implications as Mistaken Nationality and/or Mistaken Ethnicity.

In many cases—particularly if the actor is British—these types don't even have to look a certain way. They study the accent and dress in ethnic clothing, and use theatrical makeup. In such cases, the hiring studio will often be criticized for effectively stealing the role from other performers who actually belong to the ethnic group and are offered acting roles less frequently than white actors; others state that this defeats the purpose of acting, where the goal is to portray someone other than yourself. Across the pond, however, this is expressly forbidden in modern American media. SAG-AFTRA* created by the 2012 merger of the Screen Actors' Guild and American Federation of Television and Radio Artists now requires that an actor at least partially share the racial background of any character they're playing, to avoid blackface and the like. However, this can be creatively interpreted, such as the half-black Dwayne Johnson playing North African characters.

Often these actors were originally successful abroad before they were discovered by Hollywood. Might result in Classically Trained Extra. May be played with by having the character himself be of ambiguous heritage or appearance. Sometimes they will make use of Blackface, Yellowface, or Brownface.

Compare Man of a Thousand Faces.