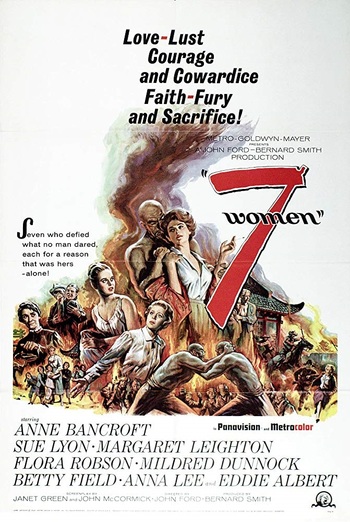 7 Women (also known as Seven Women) is a 1966 drama film directed by John Ford and starring Anne Bancroft, Sue Lyon and Margaret Leighton. It was based on the short story "Chinese Finale" by Norah Lofts.

In rural China, in 1935, there is a remote Christian mission post in which all but one of its white residents are women, headed by the strict Miss Agatha Andrews (Leighton). Emma Clark (Lyon) is the only young staff member, whom Miss Andrews treats as if she was her daughter.

The mission is elated to learn that a much-needed doctor is arriving. However, they are shocked to discover that the doctor who is arriving, Dr. Cartwright (Bancroft) is a woman who smokes, drinks, swears, wears pants and short hair, and disdains religion. As a result, she and Miss Andrews are soon at odds.

When rumors of atrocities committed by the militia of Mongolian warlord Tunga Khan (Mike Mazurki) reach the mission, Miss Andrews is at first certain that the mission will be safe, but it soon becomes clear that the women will have to protect themselves from the advances of the barbaric Mongol bandits.

This was the last feature film directed by Ford, ending a career that spanned five decades. Elmer Bernstein composed the score.