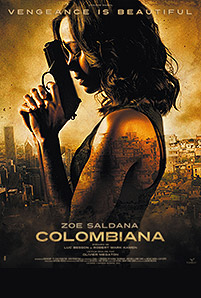 Colombiana is a 2011 action movie starring Zoe Saldaña, written and produced by Luc Besson. The film follows Cataleya Restrepo, daughter of a member of a Colombian cartel. Her parents were killed when she was 9, forcing her to flee to Chicago to live with her uncle. Using her uncle's tutelage and own intelligence, Cataleya becomes a beautiful and deadly assassin driven by vengeance for her parents' deaths.