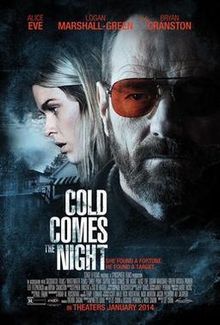 Cold Comes the Night is a 2013 Crime Thriller starring Bryan Cranston, Logan Marshall-Green, and Alice Eve and directed by Tze Chun. Chloe (Eve) is a single mother who runs a seedy motel. Topo (Cranston) is a former hitman, now going blind, who is doing a job for his old employer, ferrying a bundle of cash hidden in his car. When he stops at Chloe's motel, his driver gets into a fatal altercation with a local prostitute, the car is impounded, and he decides that Chloe will serve as his eyes and his hands to retrieve the money.