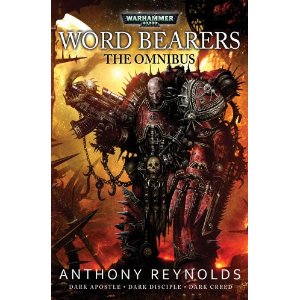 Their walls will fall.
Their faith will fail.
Their flesh will tear.
Advertisement:

Please resist the urge to put examples on this page or link to this page on tropes unless you are citing from 40K novels in which the Word Bearers feature. Examples which are specific to rulebooks and other in-universe fluff should go on either the 40K page or in the Word Bearers section of the Warhammer 40,000: Chaos Marines page.

The Word Bearers trilogy of books by Anthony Reynolds consists of Dark Apostle, Dark Disciple and Dark Creed, set in the Warhammer 40,000 universe. There are also a couple of short stories in the Horus Heresy novel series that act as backstory for several of the characters. The series focuses on the titular legion of Chaos Space Marines, rather than 40K's "good guys" like the Space Marines or the Tau. The books also go into more detail about the traditions and beliefs of the Word Bearers, expanding upon the threadbare picture of one of the most infamous legions in 40k canon* A brief history of the Word Bearers Legion, assuming you know the story behind the Horus Heresy: Their Primarch, Lorgar, was particularly devout and fanatical during the Great Crusade that united humanity, and encouraged the building of great cathedrals dedicated to the Emperor. The Emperor, trying to dispel silly superstition, rebuked him for it - while the Chaos gods offered Lorgar an alternative faith, swaying him to their worship. He corrupted the rest of the Legion through their Chaplains, which is why they were the only Traitor Legion to retain the majority of their Chaplains - or Dark Apostles, as they were now known - while those belonging to the other Traitor Legions had tended to be killed by their traitorous brethren, being more likely to remain loyal to the Emperor. Worse than all of this, however: the Word Bearers, through Chaplain Erebus, were responsible for the corruption of Horus, directly leading to the GRIMDARK *deep breath*.

The main plot focuses on a specific Host commanded by the Dark Apostle Jarulek and his apprentice Marduk on their search for an artifact that supposedly predates humanity. The prophecies say it will turn the tide of the war against the Imperium but other than that they know nothing. The remainder follows Marduk has he continues his master's work, eventually rising to become Dark Apostle himself and getting caught up in the machinations and intrigue of the Legion's higher-ups.

Also check out the character sheet.