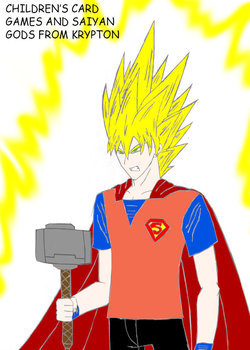 This page is still under work.

The weirdest crossover fanfic that might just have you rofling if it's in your taste. It also helps if you happen to be a fan of the anime, manga, comics, tv shows, movies, everything that it intends to parody.

There is a school. A school for protagonists and anyone who wants to be one. There is one man there who is a cut above the rest. His name is Kai. He can kick ass like no other because he is half Saiyan and half Kryptonian as well as being raised and empowered by the Asgardian Gods of the Marvel Universe. He can kick so much ass he could put Kamina and Wonder Woman to shame, and be able to befriend so many enemies it puts Nanoha to shame. The catch: He loses his powers thanks to Loki the Norse Marvel god of mischief. Now he's as powerless as Captain America (not that that's the worst thing) and has to get help from one man to deal with his own mortality. The Batman. Now he is being trained to be the new Batman. And it's gonna be Hell. Now he will end up having tons of absurd adventures along with his new sidekick Akemi Homura.

This is a simple but crazy comedic crossover story that was made by Deviantart user Ryuu-Sei-Oh. This is not just a crossover of either anime, manga, video games, or comics but a crossover intending to be for all stuff fictional. Keep in mind that this story was made mostly for shit's and giggles, so in the end this is not being made to be a successful best seller or anything like that. It is one of those things that starts off as something to get rid of boredom that turns into a hobby to pass the time with the hopes that people get at least a slight chuckle out of it. It's not written like nomral fan fiction so it won't read out like normal fan fiction that you find on the web.

You'll also find some of it rewritten in traditional format on Fanfiction.Net under a different title: https://www.fanfiction.net/s/9961981/1/Kaiser-Chronicles

. Some minor changes have been made to the plot.