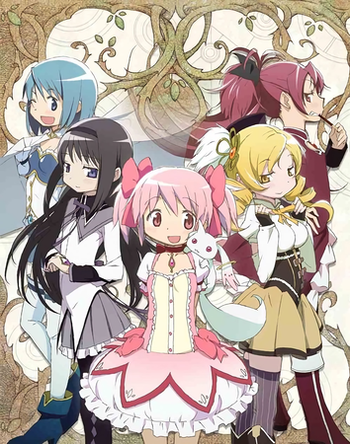 There is hope beyond despair.note From left to right: Sayaka Miki, Homura Akemi, Madoka Kaname (with Kyubey on her left arm), Mami Tomoe and Kyoko Sakura. Not pictured: PTSD.
"A person becomes naïve if they're too kind. Careless if they're too bold. And no matter how hard you try to protect others, there's no gratitude. Those who can't comprehend such things aren't fit to be magical girls."
— Homura Akemi
Advertisement:

Madoka Kaname is an Ordinary Middle School Student with a loving family and a close circle of friends. One day, an enigmatic girl named Homura Akemi transfers into her class, setting off a chain of events that will completely change Madoka's life.

For you see, bizarre creatures called “witches” have been attacking Earth, killing innocent humans. In the shadows of the city of Mitakihara, a war is being waged between the grotesque witches and the magical girls who fight to limit their destructive influences. It is said that a mysterious witch, known only as Walpurgisnacht, will appear and destroy the world. A small cat-like creature called Kyubey appears before Madoka, and offers to grant a single wish in exchange for her services as a magical girl. It turns out that Kyubey has a plan to Save the World by destroying the witches, but the little creature will need Madoka’s help — and Kyubey sees great potential in her. The idealistic Madoka wants to accept the contract so she can help people in need, but Homura — who reveals herself to be a Dark Magical Girl — seems determined to stop Madoka for unknown reasons.

Who is Homura, and what is her deal? Just what are the witches? What is Kyubey’s plan, and why does it require Madoka specifically? And what is Madoka’s destiny — can she truly save the world? Or will she fall to despair?

One thing becomes clear early on, though; things are not as they seem. What appears to be a straightforward Magical Girl Warrior tale becomes a twisted, morally complex, and surprisingly terrifying exploration of concepts like hope, despair, entropy, utilitarianism, and the psychological issues of the Magical girls, and it does not pull punches in regards to the horror the girls have to endure. The series is, in fact, the Trope Codifier for Magical Girl Genre Deconstruction, and has served as the primary inspiration for a whole slew of imitators which, by gradually putting their own spins on the concept, spawned an entire magical girl subgenre. The full scope of this series' impact is extensive — its influence has been observed in other anime and manga like Magical Girl Raising Project, Day Break Illusion, and Yuki Yuna is a Hero, tokusatsu series like Kamen Rider Gaim note which notably shares a writer with Madoka Magica, and even Western works like the American graphic novel series Sleepless Domain.

Bringing together an all-star staff, Puella Magi Madoka Magicanote Mahou Shoujo Madoka Magica in Japanese, with "Mahou Shoujo" meaning "Magical Girl" has Studio Shaft animating, Shaft's primary director Akiyuki Shinbo directing, Yuki Kajiura producing the music, nitro+'s Gen Urobuchi writing and Ume Aoki designing the characters for Shaft's first original series in a decade. The show started airing in January as part of the Winter 2011 season, though it was put on a temporary hiatus due to the Sendai earthquakes in Japan. The final two episodes were broadcast back-to-back on April 21st;

the initial announcement was met with much rejoicing. When it was aired on Nico Nico Douga,

over one million people watched. Compare this to Lucky Star's similar stream, which was closer to half a million.

The series has been dubbed and released in North America by Aniplex USA and Manga Entertainment in the UK. The series was aired on Australian TV on ABC3 starting on June 29. The series is available for streaming both subbed and dubbed on Crunchyroll

In November 2011, a theatrical film trilogy

was announced. It is composed of the following:

for a new Puella "project" was released. Because of previous announcements

that the studio was considering making a Rebellion sequel, this may be confirmation of such a sequel. After an over 4 year long period of total silence regarding a potential continuation of Madoka's story, a new movie titled Puella Magi Madoka Magica Movie: Turning the Tide of Walpurgis, set to continue the story after the ending of Rebellion, was teased on April 25th, 2021, as part of the franchise's 10th anniversary celebration.

In October 2016, it was revealed that the anime will be crossing over with The Battle Cats, featuring characters from the anime as Cat units and enemies. It has not yet been revealed what content will land on Madoka Magica's side.Note This is far from the series only collab, as over the course of its life, Madoka has collaborated with certain games, including but not limited to Monster Hunter (Monster Hunter Frontier and Monster Hunter Explore), and many mobile games such as Valkyrie Connect, Kurokishi to Shiro no Maou or The World of Mystic Wiz.

The anime has several spin-offs, such as manga and games, which can be found in detail on the franchise page.

Contrast Cardcaptor Sakura, which serves as the show's most obvious antecedent; Claymore and Lyrical Nanoha which are examples of relatively adult and drama-laden treatment of the genre that are, however, played straight; and Kill la Kill for a series that is the Spiritual Antithesis to this show, as well as Panty & Stocking with Garterbelt for the comedic version of this show.

NOTE: Please put tropes for Rebellion and Wraith Arc on their own pages.

Late-Arrival Spoiler Warning: Puella Magi Madoka Magica is one of the most popular anime franchises to come out of the 2010's. As such, there are a great deal of spoilers. Most of them are marked, while others aren't. Avoiding these pages is highly suggested for those who have not seen the series.

Don’t forget.
Always, somewhere,
Someone is fighting for you.
As long as you remember her,
You are not alone.
Feedback