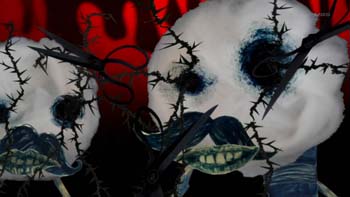 Considering the pedigrees behind Puella Magi Madoka Magica, some creep factors are to be expected. However, the sheer level of Nightmare Fuel to be found in the series has been rather terrifying. Do NOT be fooled by Ume Aoki's sweet character designs; this show is "Devilman with Magical Girls; a Tear Jerker with tears made of pure Nightmare Fuel." Yeah, it's that kind of show.
Advertisement:

As a Moments subpage, all spoilers are unmarked as per policy. As the show is also well-known for its sudden and rapid descent into madness, many of the spoilers appear early on. You Have Been Warned.

open/close all folders
Episode 1 - As If I Met Her in My Dream...
Episode 2 - That Would Be Truly Wonderful
Episode 3 - I'm Not Afraid of Anything Anymore
Advertisement:
Episode 4 - Miracles and Magic Are Real
Episode 6 - This Just Can't Be Right
Episode 7 - Can You Face Your True Feelings?
Episode 8 - I Was Stupid, So Stupid
Episode 9 - I'd Never Allow That to Happen
Advertisement:
Episode 10 - I Won't Rely on Anyone Anymore
Episode 11 - The Only Thing I Have Left to Guide Me
Episode 12 - My Very Best Friend
PSP Game
Other