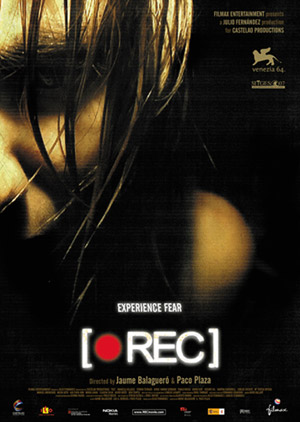 [REC] (2007) is a Spanish horror film following a news reporter, Ángela Vidal, and her cameraman, Pablo, as they cover the night shift in one of Barcelona's local fire stations for the fictional documentary series While You Sleep. However, the two intrepid reporters get much more than they bargained for when the firehouse receives a call from a residential building about an old woman being unwell and trapped in her own apartment. As they tag along with the rescue effort, Ángela and Pablo find themselves chronicling the discovery and progression of an apparent zombie outbreak in the building, which is sealed off by the authorities, trapping everyone inside. Soon they are forced to fight for their lives, as The Virus slowly takes over the tenants and responders.

In 2008, the first [REC] was remade in America as Quarantine. In 2009 a sequel, [REC] 2, was released. The third film, called [REC] 3: Génesis (2011) takes place at roughly the same time as the events of the first two films, but follows a different cast in another location. The fourth and final film, [REC] 4: Apocalipsis (2014), concludes the saga with the infection spreading to unknown proportions; the film was released in Spain on October 31, 2014.

This movie series contains examples of: