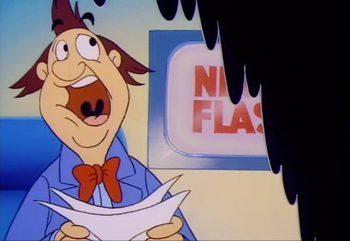 Not even the news is safe from the Blob Monster.
"Beep, Good Evening. Slate Sanchez's phone here reporting from the demolition site. Slate and the rest of the Action News team don't have AT&T, which means no bars out here on the outskirts of town. So we didn't get that call about the new blast zone — which is now here, instead of way over there. I'm Slate Sanchez, and I'm about to be The News!"
— AT&T phone commercial
Advertisement:

Sometimes, an anchor in a newsroom or (more likely) on the scene becomes the news. While reporting the chaos caused by a monster attacking the capital city or the destructive force of some sort of massive natural or supernatural disaster or another kind of dangerous situation, they happen to fall victim to that very event they were reporting on.

In many cases, right before this trope is invoked, the audience will get some clue foreshadowing the reporter's fate: a strange noise in the distance, for example. We Are Experiencing Technical Difficulties often follows.

It's very common in works related to the Zombie Apocalypse as a way to clue in the audience and the poor souls who have to suffer the event, that things are going downhill very quickly.

A subtrope of Apocalyptic Log and Ignored Vital News Reports. Sometimes appears in Kent Brockman News. Not related to Spinning Paper. See also The Fourth Wall Will Not Protect You. See also Red Shirt Reporter for when a death happens on the scene instead of in the newsroom, and Spectator Casualty, where a horrible fate happens to the audience instead of a reporter.

Not to be confused with Deadline Hollywood

, an online magazine focusing on news from the entertainment industry.

As a Death Trope, there may be unmarked spoilers ahead. Beware.