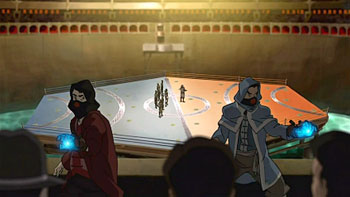 The revolution has begun!

"And the Winner Is..." is the sixth episode of The Legend of Korra, which aired on Nickelodeon on 12 May 2012. According to the official blurb, "Korra and the Fire Ferrets prepare for the pro-bending championship as a threat looms over the arena."

Korra, Mako and Bolin train for the tournament final when Amon's voice is heard on the radio. He threatens the United Republic Council to close the arena, or else there would be consequences. The Fire Ferrets dash to City Hall on Naga to learn about the Council's decision first hand. When they arrive, they are told by Tenzin and Tarrlok that the Council has unanimously agreed to close the Pro-Bending Arena. The team does not give up and tries to persuade them to change their minds, arguing that Pro-Bending brings people together. The Council, however, does not seem affected by their defense.

Just as Tarrlok is ready to strike his gavel, Lin Beifong enters and cuts it in two with her metal cables. She argues that closing the arena would be giving in to Amon, and she agrees to personally protect the citizens at the arena. All but Tenzin then vote for the games to continue. Korra then asks Tenzin of Lin's ill attitude toward her and, after Tenzin tells her that Lin is against him not her, Korra realizes that it was Lin that had been Tenzin's former girlfriend. Tenzin starts explaining their story, but decides not to finish, saying that there was no point in telling it to Korra.

Lin Beifong and her metalbenders secure the arena before the match, and deploy numerous police boats to surround the arena. The two teams are introduced and the games begin. The White Falls Wolfbats, however, are caught cheating by Shiro Shinobi, but the referee does nothing. The Wolfbats seemingly win round one with a knockout but Shinobi spots Mako and Korra hanging from the edge of the ring Korra throws Mako back into the ring and he lands a strike on one of the Wolfbats as they celebrate. Before round two, Mako comments that the referee has probably been bought off. Korra's suggesting of cheating follows, but Mako tells her that it would not be an option.

After another round of cheating, the two teams tie, and the Fire Ferrets win the coin toss. Korra and Tahno then collide in the tie-breaker face-off. Korra humiliates Tahno by not only knocking him out of the ring, but knocking his helmet off and ruining his hair. In the third round, multiple more acts of cheating are committed, the final one being Tahno's use of both earth and water to knock out the all three Ferrets with brutal earth head-shots.

After the Wolfbats win the match, Equalists in the stands put on their equipment and start electrocuting the metalbending cops. Lin and Tenzin, caught off guard, are also incapacitated. Amon, his Lieutenant, and some other Equalists appear on the stage. After a short duel, Amon takes the Wolfbats' bending away after Tahno begged Amon to spare him. Korra, Mako and Bolin, now in the pool, are electrified when the Lieutenant touches the water with his electrified kali sticks. Korra begins to have more flashbacks of Toph, Aang and an unknown man who is most likely Yakone. The trio is then dragged out of the water and tied to one of the ring's supports, all while unconscious.

After waking up during Amon's speech about equality, Bolin tells Pabu to chew through the ropes binding them. Amon then begins his leave via a specialized airship, and detonates the Pro-Bending ring. Debris falls as Pabu frees Korra, Mako, and Bolin. As Amon rides a small platform from the arena to his airship, Korra follows by pushing herself toward the glass ceiling with waterbending. She, however, runs out of water and starts falling back down, where she is saved by Lin using her metal cables.

Korra and Lin then proceed to go after Amon. When Korra and Lin reach the top of the arena, the harbor can be seen in the background with all of the police boats on fire. A battle on top of the arena follows, with Korra fighting the Lieutenant until she knocks him off the roof, and Lin fighting a couple of Equalists. The glass roof cracks and Korra begins to fall through, but is again saved by Lin, who had to make a split-second decision between going after Amon or rescuing Korra. Korra thanks her, but Lin tells her not to mention it.

As Tenzin rushes over to them, Lin tells of her devastation at what had just happened. Tenzin then concludes that Republic City is at war.