Recap / The Legend of Korra S1E5 "The Spirit of Competition" 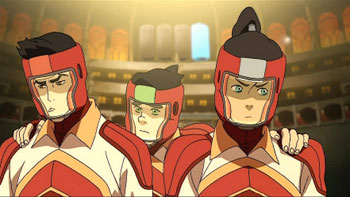 Look, it just isn't smart to date a teammate, especially during the tournament.

"The Spirit of Competition" is the fifth episode of The Legend of Korra, which aired on Nickelodeon on 5 May 2012.

The team practices in the gym, working together like pros. Asami comes in, clutching a set of new uniforms emblazoned with the Future Industries logo. Everyone thanks her, although some more enthusiastically than others. While Mako and Asami call each other "sweetie" and nose rub, Korra barely conceals her jealousy. Bolin seems rather pleased for his brother, but he seems a lot more pleased to be alone with Korra. He asks if she wants to hang out, but Korra shrugs off his advances.

Later that day in their loft, the brothers are getting ready for the match tomorrow. Bolin asks his brother what he thinks of Korra as a romantic interest. Mako doesn't really think Korra is good girlfriend material but Bolin disagrees and decides to ask Korra out. Mako warns him that dating in the team can cause turmoil, and it would be better to keep his head in the game right before the tournament. Bolin dismisses his advice.

Meanwhile, it seems winter has come to Republic City, and Air Temple Island is covered in a delicate layer of snow. All clad in fur, Korra, Jinora and Ikki bring fruit to feed the ring-tailed flying lemurs.

Jinora innocently teases Korra about her crush on Mako, which the Avatar denies she has. Hypothetically, if she did, what should she do? Jinora and Ikki have interesting opinions on how to woo someone. Pema has been listening in and is amused. She understands what Korra is going through, since she had the exact same problem with Tenzin. Pema says that for a long time she said nothing, being too afraid of rejection, but she couldn't see her soulmate spend his life with the "wrong" woman, and confessed her love.

In the first match of the tournament, the Fire Ferrets are set against the opposing team, the Red Sands Rabbaroos. Showing perfect coordination and teamwork, they easily push their opponents back, securing their victory. As Bolin laps up the cheers from his adoring fans, Mako and Korra head backstage, and Mako apologizes for not being kinder to Korra. He says that she's really pulled through, and that they have been working great together on the field. Korra responds that she thinks they've been working well together off the field, and thinks they should hang-out more. Y'know, doing something other that saving kidnapped family members? Mako seems awkward, so Korra just spits out:

Korra: I really like you, and I think we were meant for each other!

Mako does not appreciate the sentiment. He says that he's in a relationship with Asami, and that just isn't appropriate. Disheartened and rejected, Korra accepts. She turns away as Asami comes running in, wrapping Mako in a victory hug.

Bolin asks Korra out. His exuberance is infectious, so Korra accepts. Still hugging his girlfriend, Mako stares after them, with what could possibly be jealousy. Bolin and Korra have dinner at Narook's Seaweed Noodlery and meet Tahno. Korra and Bolin avoid trouble with him, then continue their date. After the date, Korra finds Mako waiting for her. He asks her what kind of game she is playing with Bolin to get back at him, which makes Korra call his reaction jealousy, to which he says he is just concerned about his brother. This argument has an effect in their next match against the Boarcupines as the team does not seem to connect well between each other. The Fire Ferrets barely win the round, needing Bolin to break a tie.

On a dock outside the Pro-bending Arena, Mako and Korra converse about their conflicted feelings. Mako confesses his feelings toward Korra, but says that he really likes Asami too, so it is complicated. Korra kisses Mako and he kisses her back. Both realize Bolin had been watching. A heartbroken Bolin runs off crying.

The next morning, Mako finds his little brother at the noodle place. Bolin had been gorging on noodles and is hysterical. Mako has to carry Bolin to the arena.

Later that night, the Fire Ferrets have their semifinal match against the Buzzard Wasps. The Fire Ferrets start off losing, with Bolin injuring his arm. He and Mako are knocked into the water below and apologize on their ride back up. The team forgives each other and agree to remain on friendly terms. They win the match. Asami enters the room and congratulates everyone, and Korra heals Bolin while apologizing for hurting his feelings. Moments later, the team find that the White Falls Wolfbats had just curb-stomped the opposing team, who are being carried of by paramedics.