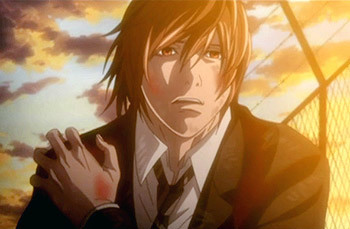 "Vegeta, you brain-dead idiot! Trunks could have been brought back, no problem! But no, you picked now to be a parent!? Oh, look at me, I'm no better. Could've just let you bite it! Now I'm monoplegicnote In medical terminology, the state of having one limb paralysed, which can be the result of physical trauma to the affected limb and Cell's gonna kill us all!"
— Gohan, Dragon Ball Z Abridged
Advertisement:

A common trope in Manga and Anime (but also in other media) where a character, when injured and no matter what kind of damage they have sustained, will hold one of their shoulders with the opposite hand. For extra dramatic emphasis, the injured may stand hunched over, with the arm attached to the grasped shoulder hanging limply towards the floor.

It is actually the recommended practice in case of chest trauma (such as a broken rib). To rotate an arm at the shoulder, one uses both the muscles in the limb and the chest muscles. Therefore, holding the shoulder prevents any accidental movement of the arm that can cause additional pain and, possibly, aggravate the injury.

Most of the time, however, it's due to the Law of Conservation of Detail, or Rule of Cool.