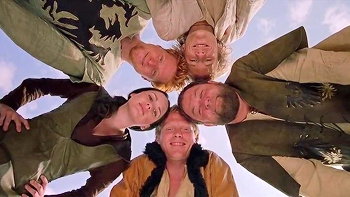 A group of characters want to discuss something privately amongst themselves, so they form a huddle; the camera POV switches, looking directly upward at the characters' heads and torsos as they talk. This is incredibly common in sports movies, where it appears during "the strategic discussion during halftime". (And in [American] Football movies, it appears even more frequently).

A huddle shot also occurs when a character lies supine and looks upwards, in which case it's a P.O.V. Cam. In a good scenario, the POV-character has overslept on an appointment or has been downed or anything else that justifies their associates to gather around to wait for them to awaken. The POV-character may respond with a freak-out upon seeing loads of people staring down at them but they may also hesitantly ask questions what's happened or going on. In a bad scenario, the POV-character finds themselves surrounded by enemies either as the last thing they see before losing consciousness or the first upon reawakening. These huddle shots tend to involve a lot of slasher smiles.

The Belchers have a family huddle when Louise comes up with an idea to reunite Koji and Yukki together and Koji sneaks in the huddle.

Alternative Title(s): Staring Down At The Viewer

The Belchers have a family huddle when Louise comes up with an idea to reunite Koji and Yukki together and Koji sneaks in the huddle.