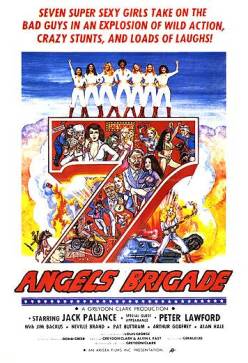 No, none of these scenes happen in the film.
Advertisement:

Angels Revenge is a 1979 movie from Arista Films, directed by Greydon Clark. It is also known as Angels' Brigade and Seven from Heaven.

The movie focuses on seven women who decide to fight the local drug cartel. The brother of Michelle Wilson, a Las Vegas pop singer, is found severely beaten. When taken to the hospital, the young man is found to have been on illegal drugs. The singer meets with April, her brother's teacher, who reveals that she's secretly been gathering intelligence on the cartel's local drug processing plant, and Michelle agrees to help April with a plan to destroy the plant. With Michelle's fame opening the door, they recruit four more women with special skills and connections to help them carry out their audacious goal. As they plan their first strike, they discover high-schooler Trish spying on them. The student gets relegated to phone duty, but eventually worms her way into their escapades. The "Angels" not only destroy the processing plant, but also manage to intercept one of the shipments. As a result, the women receive unwelcome attention from the local drug cartel.

Angels Revenge has major roles for Peter Lawford and Jack Palance as the leaders of a drug cartel, and gives minor roles to famous character actors Jim Backus, Alan Hale, Jr., Pat Buttram and Arthur Godfrey (playing himself). Of the actresses who played the movie's seven female protagonists, however, the closest any had previously come to any degree of fame was Robin Greer, who won prominent roles on Ryan's Hope and Falconcrest. Susan Kiger was the Playboy Playmate of the Month for January 1977, and played singer Michelle Wilson; her co-stars were Sylvia Anderson as stuntwoman Terry Grant, Lieu Chinh as martial arts instructor Keiko Umaro, Jacqueline Cole as high-school teacher April, Noela Velasco as model Maria, and Robin Greer as policewoman Elaine Brenner. Robin's younger sister Liza Greer plays high-school student Trish, who invites herself into the team.

The original version (Brigade) did not have the How We Got Here In Medias Res opening. Rather, it started chronologically. The later version (Revenge) added the narration by Cole (who was incidentally Greydon Clark's wife).

Not to be confused with the cheesy 1980's Angel

films, which included similarly titled sequels as Avenging Angel, Angel III: The Final Chapter and Angel 4: Undercover. Also not to be confused with Charlie's Angels, although that was almost certainly the filmmakers' intent.