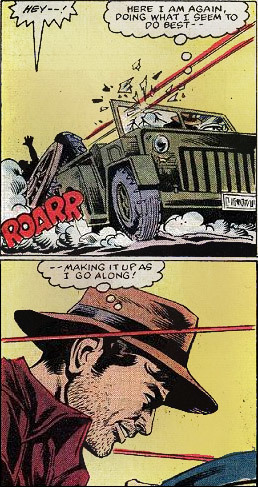 Dr. Jones never needs a "Plan B," because he never has a "Plan A."
"Improvise is one of the few battle plans that survives contact with the enemy."
—Sam Starfall, Freefall
Advertisement:

The favorite plan (or rather, lack thereof) of almost every Action Hero and Idiot Hero in existence.

The Indy Ploy is when someone improvises a plan in the middle of the action or comes up with one immediately before the action starts. Either way, the initial plan has failed, and now the character is forced to come up with a new plan on the fly with no time to prepare or think about the consequences. Maybe The Team has lost The Smart Guy. Maybe The Leader has the attention span of a distracted goldfish on caffeine. Maybe The Plan our heroes were relying on was trashed beyond all hope of being salvaged. Maybe The Strategist was off planning something else. No matter the reason, they are now executing an Indy Ploy.

Not all characters involved are necessarily aware of the leader's lack of forethought. When he finally utters those dreaded words, "I'm making it up as I go", hilarity is sure to ensue. If things don't go smoothly, expect exclamations of "What Were You Thinking?!"

An Indy Ploy is also a surefire way to invoke an Unspoken Plan Guarantee. Since Indy's course of action is unknown even to Indy himself, and therefore unknown to the audience, Indy is more likely to succeed than if he had spent time planning on-screen.

Named after Indiana Jones, who has had to make more hasty exits than most of us have had hot dinners.

Contrast Strategy, Schmategy (where the character just acts at random without even improvising a plan on the fly), Xanatos Gambit (a plan where all reasonable outcomes are beneficial) and Batman Gambit (where the gambitter uses his knowledge of what all involved will do in order to use them as pieces on the board). Between them and this trope lies Xanatos Speed Chess, where the plan, generally more complicated than "survive and don't get caught", is continually adapted to circumstances. This can lead to a Spanner in the Works where they cannot be predicted because they don't know what they are going to do next.

See also "How Did You Know?" "I Didn't." and I Have No Idea What I'm Doing. May involve Holding the Floor. Unrelated, despite the name, to the Indy Escape, which does involve a plan: RUN. Those who weaponize this may employ Confusion Fu. Writing by the Seat of Your Pants is when the author does this.

When Otabin has Luz and Amity partially sewn into his book, Luz is able to get them both away from him, but she admits she didn't think her plan would work and doesn't know what to do next.

Alternative Title(s): The Best Plan Is No Plan, No Plan, Making Up Your Plan

When Otabin has Luz and Amity partially sewn into his book, Luz is able to get them both away from him, but she admits she didn't think her plan would work and doesn't know what to do next.