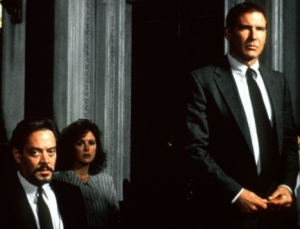 After prosecuting attorney Carolyn Polehmus (Scacchi) is found murdered, deputy prosecutor Rozat 'Rusty' Sabich (Ford) is assigned to investigate. However Sabich had been having an affair with Carolyn prior to her murder and is deeply conflicted. After he digs too deep and uncovers corruption at the highest levels of the judicial system, Sabich finds himself accused of the murder and must fight to clear his name, with the help of his lawyer (Julia) and his wife (Bedelia).

Adapted from the 1987 novel of the same name by Scott Turow. Turow wrote a Spin-Off centered on Sandy Stern called The Burden of Proof , which was adapted into a 1992 miniseries by Mike Robe. Some twenty years later, Turow published a full sequel, Innocent, which was also adapted into a film in 2011 and also directed by Mike Robe.