My God, You Are Serious! 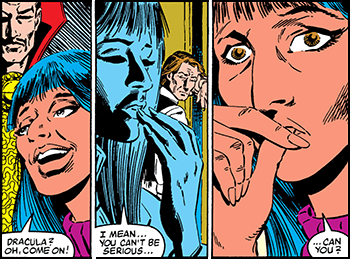 Leela: Doesn't it bother you even a little to be taking advantage of your girlfriend's trust?
Bender: Ah ha ha, ha ha ha! ...Oh wait, you're serious. Let me laugh even harder! HAHAHAHAHAHAHAHAHA!!
— Futurama
Advertisement:

The inversion of I Was Just Joking. A character says something that sounds insane or absurd. Another character either laughs or snarks You Have GOT to Be Kidding Me! or perhaps And I'm the Queen of Sheba — then realizes with alarm that the other character wasn't joking.

Expect to hear this phrase every time a Deadpan Snarker is confronted with the Zany Scheme of the week. Badasses who say things like "I'll just have to burst in and take them all out, then!" can usually expect this reaction, too.

Compare Mood Whiplash, Not Hyperbole, And You Thought It Was a Game. Contrast "Not Making This Up" Disclaimer, where the authors feel that a statement about the real world sounds so absurd that it has to be confirmed as true.