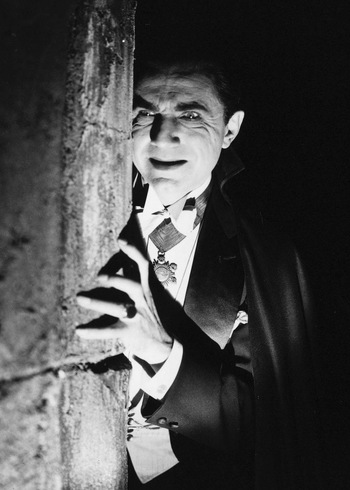 "Accept no substitutes. Or I vill eat zem. Bleh!"
Advertisement:

For the best reading experience possible, listen to this

while going through the article.

The vampire. As Sherlock Holmes is to detectives, James Bond to secret agents, and Superman to superheroes, so Dracula is to vampires.

Count Dracula was created by Bram Stoker in his 1897 novel of the same name. Stoker wasn't the first to introduce vampires into western literature (see the "penny dreadful" — emphasis on "dreadful" — novel Varney the Vampire for one precursor; also Joseph Sheridan Le Fanu's Carmilla, which introduces lesbian vampires; and The Vampyre, which was written by Dr John Polidori at the suggestion of Lord Byron, for the same writing contest in which Mary Shelley created Frankenstein), but his Dracula was the first to enter popular culture — the vampire known even by people not familiar with the book, or even the genre.

Stoker named his Count after the historical figure of Vlad III Drăculea (or Drăculești, depending on the translation), voïvode of Wallachia (part of modern Romania) — or, as he is popularly known, Vlad the Impaler. Despite being similarly bloodthirsty, the latter was more prone to having his enemies impaled upon stakes than to biting their necks and drinking their blood. Still, in the novel the Count claims to be related to Vlad III and Van Helsing even conjectures that the two are one and the same. (Though, to be sure, given some of the historically-inaccurate details in the novel it seems fair to say that Stoker didn't actually know all that much about the historical Dracula beyond the name and a degree of the reputation, probably less than modern fans do.) Because of this connection, "Vlad" is commonly used as a first name when Dracula appears in works that actually give him a first name, whether or not any historical reference is made.

Stoker invented some of the classic vampire traits, such as not casting a reflection, and popularised others, like shapeshifting into animal forms and an aversion to garlic and crucifixes. But Dracula does not follow the standard rules in the novel, largely because he predates most of them. Sunlight does not do any real harm to him, though his powers are diminished in daylight and it prevents him from shapeshifting. He also starts the novel as an old man and de-ages as he drinks blood, a tidbit kept in only a few of the adaptations.

Most series with vampires will eventually include either Dracula or a subversion, sometimes using a transparent alias. "Alucard", which despite sounding French is "Dracula" spelled backwards, is very common and has been used in several movies, most famously Son of Dracula. Some appearances of Dracula treat "Dracul" as another name for him, but they have distinct meanings. The name "Dracula" means "son of Dracul" in Romanian, literally "son of (the) dragon", but has come to mean "son of the Devil". As such, it fits the fictional vampire surprisingly well. "Dracul" was Vlad III's father, Vlad II, who was called that as a result of his association with the Order of the Dragon

and his questionable – from an orthodox Wallachian's point of view – architectural design choices regarding the churches he had built.

Despite being the archetype of all modern vampires, Dracula was remarkably angst-free in the original novel, and operated simply as a vicious, sadistic, and distinctly creepy archvillain (with a monobrow, rancid blood-breath, and hair on his palms, no less) whose only redeeming quality was his cunning (though there is some sympathy for Dracula the man, as opposed to Dracula the vampire, as it's established that the soul of a person who becomes a vampire is prevented from entering heaven until the vampire is destroyed, reflected by the look of peace on him as he crumbles). He never even bothered to seduce any of his female victims, simply entering their rooms and attacking them or using hypnosis to draw them to him. Subsequent versions, naturally, have Flanderized his sex appeal and added oodles of gothy melodrama. He had some properly gothic angst, but it wasn't based on Mad Love or reluctant villainy — he was simply a very old, very tired Evil Overlord, bored with ruling a backwater area in Ruritania, who decided to Take Over the World or die trying, and would be happy with either outcome. The entry for this story is here.

Dracula may live in a Haunted Castle, or at least own one in the old country. Usually has a Vampire's Harem of three or more women (likely past victims he turned) at his side as his minions. He also may have Ominous Pipe Organ as his Signature Instrument.

He has appeared in more films than any other character, fictional or otherwise, except for Sherlock Holmes — including films where both appear together. Dracula continues to be the subject of new films, books, comics, video games, etc. as there is a fascination with the character that has long since outlived his author and the first book.

See also Fight Dracula, for where Dracula turns up as a villain-of-the-week in somebody else's story.