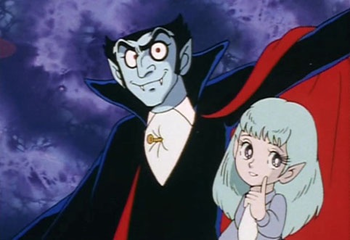 Don Dracula is a comedy horror manga by Osamu Tezuka that was serialized in Weekly Shonen Champion from May to December 1979. The series depicts the constant misadventures of Count Dracula, who moves to Tokyo along with his daughter Chocola and his faithful servant Igor. Every night Dracula goes after beautiful young women to suck their blood, but his plans are always undermined for one reason or other. To make things even worse, Dracula has to deal with two undesired stalkers: Professor Helsing, his long-time nemesis, who follows Dracula in Japan and tries to kill him and Chocola whenever he can; and Blonda, an overweight and ugly woman who became obsessed with Dracula as she was the first woman that he bit after his arrival in Japan.

There was also an anime series that was produced in 1982 and was scheduled to feature 26 episodes. Unfortunately, when the company that was sponsoring the anime went bankrupt, the studio was only able to finish 8 episodes. Due to a dispute with producing TV station TV Tokyo, only four of these were aired. (Screenplays had been completed up to episode 21 at the time the series was cancelled.) For unknown reasons, the missing episodes were broadcast in other countries, but remained unavailable in their homeland until they were released on DVD.

Despite the original series' extremely short run and the anime's Troubled Production, Dracula and Chocola remain among Tezuka's most popular characters, and can be seen in many of his other works, such as Marine Express and Black Jack. Dracula and Chocola even made an appearance in the Game Boy Advance game Astro Boy: Omega Factor.