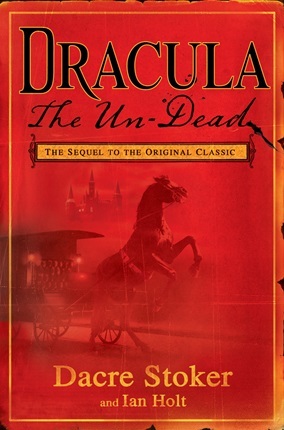 For the Freda Warrington book, see Dracula the Undead.

It's 1912, and young Quincey Arthur John Abraham Harker has always wanted to be an actor: the glory, the art, seeing the world. Too bad his father, Jonathan Harker, insists on Quincy following in his footsteps as a lawyer no matter what. In his last desperate attempt to make a name for himself in theater, he stumbles on a failing author by the name of Bram Stoker as Stoker is trying to stage a production of his little-known horror novel about a vampire named Dracula. Quincey is very surprised to find that characters in the novel suspiciously resemble his parents and some of their friends...

Jack Seward, once a respected doctor but now ruined and a morphine addict, is now hunting vampires who turn out to be Psycho Lesbians, with the help of a mysterious "benefactor". He and his allies are still determined to fight an unholy evil, but 25 years after last time, it's not going so well.

Inspector Cotford is a police officer in London who has a promising career until he let Jack the Ripper slip through his fingers by a hairsbreadth decades before. He has lost all chance for advancement, but never forgot about what his failure cost the world. When mutilated bodies start turning up in the streets of London again, he's back on the killer's trail.

Dracula the Un-Dead is a sequel to Bram Stoker's Dracula. There are many sequels and adaptations of this classic Public Domain Character, but this novel is unique in that it is the first and only one authorized by the family: it was co-authored by screenwriter Ian Holt and by Dacre Stoker, Bram's great-grand-nephew, partially in hopes of reclaiming the family legacy. In addition to being a straight-up sequel — to the hunters who put Dracula down in the original book, it looks like he has returned and wants revenge — Dracula the Un-Dead also writes in Stoker himself as a character, attempts to elaborate on a number of vague details from the book, explains how several characters met and includes some vampire lore that wasn't in the original story. There's also Jack the Ripper.

Dracula the Un-Dead provides examples of: