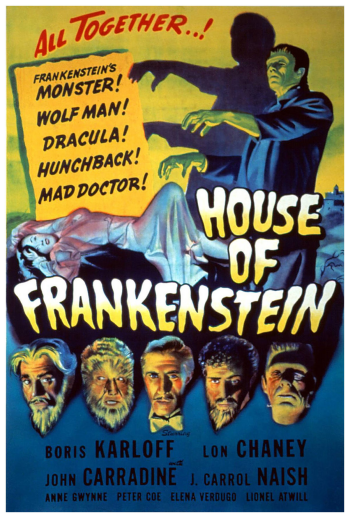 THE DEVIL'S BROOD! All the screen's Titans of Terror - together in the greatest of all SCREEN SENSATIONS!
Advertisement:

House of Frankenstein is a Universal Horror Monster Mash movie from the year 1944.

Few years have passed after the brawl between the Frankenstein's Monster and the Wolf Man. The film opens with Mad Scientist Dr. Niemann (Boris Karloff) escaping a prison, where he was sent after experimenting with the dead, with a hunchbacked murderer Daniel. After taking over a travelling "Chamber of Horrors", Niemann sets out to do the first thing on his mind: Revenge upon those who sent him away for fifteen years.

He finds that the main event of his newly acquitted sideshow, Dracula's (John Carradine) staked corpse, is pretty much real and sends him after his first target in the town of Riegelberg. After that business, Niemann sets out to village of Frankenstein (previously known as Vasaria) and finds the bodies of Larry Talbot (Lon Chaney Jr.) and the Monster (Glenn Strange) encased in ice under the remains of Ludwig Frankenstein's sanitarium. He decides to revive the Monster and promises to help Lawrence Talbot on breaking his werewolf curse to get his assistance. Then they set out to Niemann's old place in Visaria (not to be confused with the aforementioned Vasaria) to begin the experimenting...

More Monster Mash would eventually be provided by the next sequel, House of Dracula. In 1997, NBC created a mini-series remake of the movie with the backing of Universal. See House of Frankenstein (1997) for more information.

Upon entering the House of Frankenstein, you'll find: