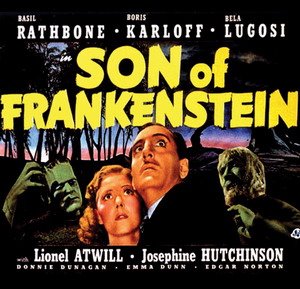 "By Heaven, I think you're a worse fiend than your father!"
—Inspector Krogh
Advertisement:

Son of Frankenstein is a 1939 horror film, the third film in Universal's Frankenstein series. It stars Basil Rathbone as the eponymous son, Bela Lugosi as Ygor and Boris Karloff as Frankenstein's Monster for the final time in his career. Notably absent is Dr. Henry Frankenstein, the Monster's creator - Colin Clive passed away in 1937, before production began on this film.

A couple decades after the events of Bride of Frankenstein, Dr. Wolf von Frankenstein with his wife and son arrive in the town of Frankenstein (previously known as Goldstadt) to claim his inheritance from his late father, namely the Castle Frankenstein. Terror of the Monster still fresh on their minds, the townsfolk shun Wolf but he keeps his mind open. He meets his father's previous assistant Ygor, who survived a hanging attempt following his conviction for Grave Robbing. Ygor reveals that the Monster is still alive, but is in bad shape due to being struck by lightning one night, and begs Wolf to help it. Wolf decides to restore the Monster in the name of science, but Ygor has other plans in mind...

Son is considered to be Universal's last great Frankenstein movie and Lugosi's portrayal of Ygor is often hailed as a high-point in his career. The film's basic concept and a number of ideas unique to it (such as Krogh's artificial arm) were specifically parodied by Young Frankenstein.

The film was followed by The Ghost of Frankenstein.

Son of Frankenstein contains examples of: