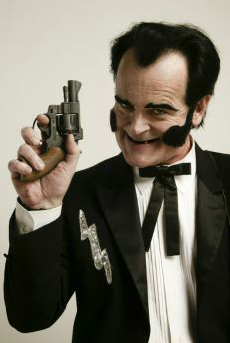 Unknown Hinson (Named 'cause his birth certificate said "Mama: Miss Hinson. Daddy: Unknown") is the Hillbilly Vampire. The King of country-western troubadours. A man out to reclaim his rightful place as King of the music scene after several years in prison.

Or so the character story goes. In reality, Unknown is the performer persona of Stuart Daniel Baker (born November 7, 1954), an over the top parody of country troubadours through the 50's to 80's.

Easily identifiable by his (Glued on) sideburns and slicked back hair, Unknown sings parodies of country ballads, typically dealing with such situations as kidnapping a girl, drinking "Party likker" and causing general hell wherever he goes.

He's perhaps most well known for voicing his animated Expy Early Cuyler on Squidbillies. However, he was fired from from his role due to derogatory social media posts criticizing Dolly Parton.