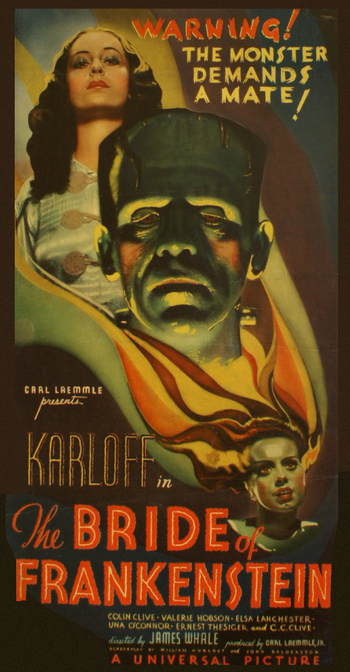 "To a new world of gods and monsters!"
— Dr. Pretorius
Advertisement:

Bride of Frankenstein is the 1935 sequel to the 1931 film Frankenstein. It was directed by James Whale. It is widely considered to be the best of the old Universal Horror movies. Boris Karloff and Colin Clive reprise their roles as the monster and Dr. Henry Frankenstein, respectively, while Ernest Thesiger joins the proceedings as as Dr. Septimus Pretorius and Elsa Lanchester plays the eponymous Bride.

We begin in the home of Lord Byron, entertaining his friends Percy and Mary Shelley as a storm rages outside. At Byron's urging, Mary continues the story of Frankenstein, picking up about where the original film left off.

Henry Frankenstein just barely survives the collapsing windmill, but so does the monster. Shortly thereafter, Frankenstein receives a visit from his old mentor, Dr. Pretorius, who wants to join forces and continue Frankenstein's experiments to create life. In one of the movie's most memorable scenes, Pretorius shows Frankenstein a series of little people in jars, including a mermaid, a ballerina and a little devil. Pretorius can make people, but he can't get them up to normal size. Frankenstein, meanwhile, has created a giant. And so Pretorius proposes a plan: Frankenstein will provide the body, and Pretorius will provide the brain.

Meanwhile, the monster has several encounters with angry villagers and is eventually taken in by a kindly old blind hermit. The hermit teaches the monster to speak, and is the only friend he's ever had. Naturally, the villagers show up and drive the monster away, and he goes to a graveyard to find solitude among the dead. And whom should he happen to meet but Dr. Pretorius gathering parts for the new creature. Enticed by the possibility of having a friend, the monster forms an alliance with Pretorius.

Frankenstein, meanwhile, is getting cold feet about creating another monster. In a sequence reminiscent of the original novel, the creature and Pretorius kidnap Frankenstein's young bride, Elizabeth, and threaten to kill her unless he makes the monster a mate. It all leads up to an explosive conclusion in Frankenstein's laboratory, where the new monster has finally been born.

One thing to note: Although the monster is childlike and rather sympathetic, he still kills people — a lot of people. Film historians put the original death count at 21, but it was edited down to 10 due to The Hays Code restrictions of the time. At one point the monster seems to break into an elderly couple's house and kill them just because. Like King Kong's tendency to eat people, the monster's violent nature is often glossed over to facilitate a "we are the REAL monsters" aesop.

The franchise was continued in Son of Frankenstein.

The Bride of Frankenstein, despite her rather short screen time, has become a huge icon for classic horror movies and is one of the most commonly merchandised of the monsters of "Universal Horror".

This film helped to bring along the misconception that Doctor Frankenstein's monster was named "Frankenstein", though it's certainly not the first instance of this misconception. It can be seen in political and movie related cartoons dating back long before this movie.

A remake of The Bride of Frankenstein set in the Universal Dark Universe was scheduled for a 2019 release, but is currently in Development Hell due to the poor performance of said movie universe's first film, The Mummy.