Film / The Evil of Frankenstein 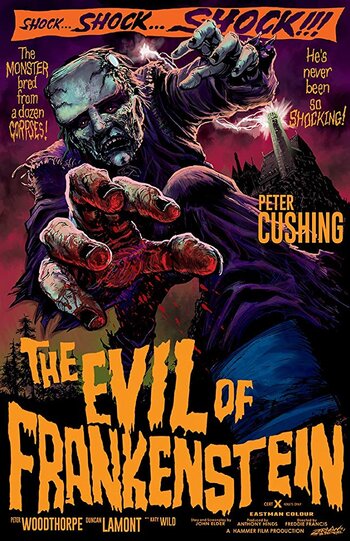 The third installment of Hammer Horror Productions' Frankenstein series, Evil of Frankenstein sees the titular doctor (Peter Cushing) and his student Hans travel to the town of Karlstadt, a place the doctor has been to before until the townspeople banished him from the district for his previous attempt at creating a monster, which is believed killed. The two reach Frankenstein's old home, hoping to sell some of his property to make more money to delve into their research but tragically find the chateau both vandalised and ransacked.

Frankenstein: Won't they ever leave me alone?

Left without an option, the two travel to town, utilising the carnival taking place there to hide their presence. There, Frankenstein sees the burgomeister and the chief of police celebrating the day and, to his great resentment, also sees that the burgomeister is one of the thieves that stole his property when he recognises the Frankenstein signatory ring on the man's finger. His outrage leads him and Hans to be recognised and they flee, encountering a master magician and hypnotist Zoltan along the way. The two run into a young woman they had inadvertently helped earlier and she leads them into a cave where they find the monster frozen in a block of ice. Frankenstein endeavours to revive him but once again faces another complication to his plans when he discovers that the monster's senses have been dulled by both the damage and its time encased in ice, and he enlists Zoltan to help.

Then things take another turn for the worse when the process has the monster answer only to Zoltan, and the egocentric magician proves to be an ambitious, greedy opponent.