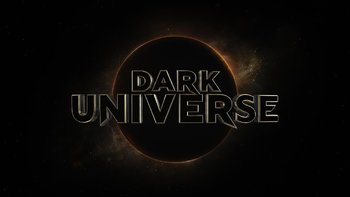 "Welcome to a new world of gods and monsters."
— Dr. Henry Jekyll, The Mummy
Advertisement:

The Dark Universe was an attempt to start a combined setting of monster films produced by Universal Pictures, featuring reimagined takes of the classic Universal Horror characters.

Originally intended to launch with 2014's Dracula Untold, development of the Dark Universe was postponed when that film underperformed. It instead was meant to begin with 2017's The Mummy reboot, starring Tom Cruise as canon foreigner Nick Morton, Russell Crowe as Dr. Jekyll, and Sofia Boutella as the titular mummy.

While the only other film in this setting whose title had been announced was Bill Condon's Bride of Frankenstein remake, Javier Bardem and Johnny Depp were cast as Frankenstein's monster and The Invisible Man, respectively. Prolific composer Danny Elfman composed a leitmotif for the franchise, titled "Monsters Legacy"

Due to the critical and box office underperformance of The Mummy, Universal announced in January 2019 that the Dark Universe was completely scrapped. They are instead making director-driven films based on the classic monsters, starting in 2020 with a small budget reboot of The Invisible Man co-produced by Blumhouse, but without starring Johnny Depp as previously reported.

In June 2020, David Koepp revealed in an interview that he and Universal executives have agreed on a script and scaled down budget for the Bride of Frankenstein remake, and that they are looking for a director.

Entries in the Dark Universe include:

The Dark Universe contains examples of the following tropes.