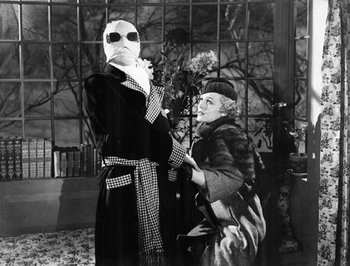 He may not look it, but this man is one of the most dangerous Universal Monsters of all time.
"You'll run gently down and through the railings. Then you'll have a big thrill for a hundred yards or so till you hit a boulder. Then you'll do a somersault and probably break your arms. Then a grand finish up with a broken neck."
— Jack Griffin
Advertisement:

The Invisible Man is a 1933 Universal Horror film, directed by James Whale and starring Claude Rains. It is based on the novel by H. G. Wells.

On a snowy night, a mysterious stranger (Rains), his face swathed in bandages and his eyes obscured by dark goggles, comes to a sleepy English town and lodges himself a room at the local inn. The stranger is not very interested in interacting with the locals, demanding to be left alone and isolates himself in his room, but he quickly becomes the talk of the town as it becomes evident that he conducts strange scientific experiments behind the closed doors. Eventually the stranger starts falling behind on his rent, and when one of his experiments makes a mess of the room, the inn keeper is finally fed up with his weird behaviour, and tries to kick the man out, only to be beaten up and thrown out by the man instead. The altercation attracts the attention of the local police constable, who gathers some villagers as backup in an attempt to take the man into custody. Far from intimated by this, the stranger starts laughing maniacally at his would-be captors, and takes off his goggles and bandages before the astonished eyes of the gathered men, revealing himself to be completely invisible underneath them.

From this point on, the story follows the invisible man's trail of destruction and terror across the land as he attempts to either find a cure for his condition or take over the country (whichever is more likely). He is eventually discovered to be a scientist named Griffin, who was engaging in some illicit experiments. His old girlfriend Flora is played by Gloria Stuart, 64 years before Stuart starred as the old Rose in Titanic.

A sequel, called The Invisible Man Returns and starring Vincent Price in the title role, was produced in 1940. That same year Universal would also release the more comedic film The Invisible Woman.

A remake of the film, which was to star Johnny Depp in the title role, was tentatively planned for Universal's Dark Universe, but shelved indefinitely after The Mummy's poor performance at the box office effectively scrapped future plans for that franchise. It was later announced that the remake would instead produced as a standalone film in conjunction with Blumhouse, to be directed by Leigh Whannell (Upgrade). In this version of the story, Cecilia (Elisabeth Moss) is the protagonist, while the title character (Oliver Jackson-Cohen) is the antagonist.