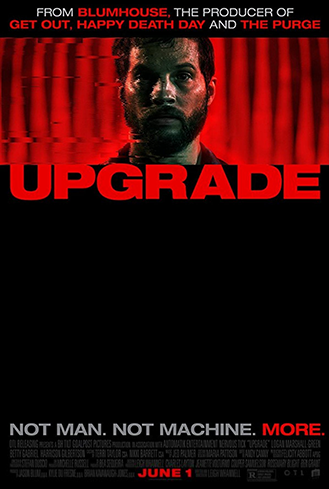 "I cannot allow us to be killed. We're going to finish the work we started."
— STEM
Advertisement:

Upgrade is a 2018 sci-fi action film written and directed by Leigh Whannell, co-creator of Saw and Insidious, and starring Logan Marshall-Green.

In a technologically advanced near-future, the life of mechanic and self-avowed technophobe Grey Trace (Marshall-Green) is changed forever one night when he and his wife Asha are mugged by a group of criminals who kill Asha and render Grey a quadriplegic.

Sometime later, billionaire inventor Eron Keen — a previous client of Grey's — offers him a chance to walk again by implanting an experimental computer chip called STEM in his spinal cord. Upon agreeing to have the chip implanted, Grey discovers that not only can he use his body again, but STEM has a mind of its own and is more than willing to help Grey catch his wife's killers.

Whannell wrote the first draft of Upgrade at least six years before making it. The film premiered at South by Southwest 2018 in March of that year, and received American and Australian releases in June.