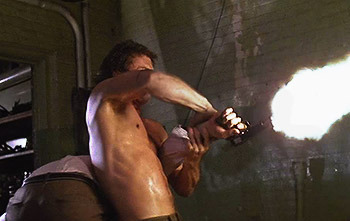 In the action genre, some characters go beyond a mere Gun Struggle. They will intercept an opponent's gun arm, aim it where they please and force their victim to shoot by squeezing the trigger finger.

Usually the objective here is to wipe out the adversary's fellow mooks. There's no time to disarm them conventionally and risking exposure to shots. Another possibility (contrary to the title of the trope) is eliminating the threat of a weapon by firing all its ammunition. Sometimes reducing the gun to pieces, to be absolutely sure. Then the battle can turn into a hand-to-hand fight.

There are several interesting permutations:

Requires Improbable Aiming Skills to correctly land shots on moving targets while forcing a struggling mook to aim their arm. Usually characters are able to kill with a bare minimum of shots using this trope. Popular with The Ace, a Cowboy Cop and/or a character with Success Through Insanity. Sister Trope to Gun Struggle, which might occur before during and/or after the shots are fired. Also see Use Their Own Weapon Against Them.