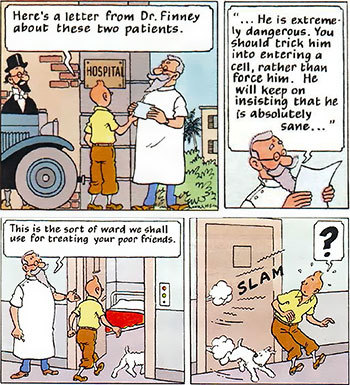 "Wilt thou know
The effect of what I wrote?...
That, on the view and knowing of these contents,
Without debatement further, more or less,
He should the bearers put to sudden death,
Not shriving-time allow'd."
— Hamlet, Hamlet
Advertisement:

The plucky, eager young messenger has been ordered to deliver a message to the queen. The messenger, desperately wanting to please his superiors, runs along as fast as he can and hands over the envelope before the wax has dried. He watches, nervously, as the queen reads it and... wait, why is she pointing a gun at him?

What do you mean, the message told her to?!

This trope is when a character sends another — usually an Unwitting Pawn — to deliver a message containing the single instruction to harm the person delivering the message. While the instructions are usually fatal, that is not a requirement for the trope. This method of disposing of the Unwitting Pawn is usually a Kick the Dog moment for the person sending the message.

Not to be confused with Shoot the Messenger, Spare a Messenger or Don't Shoot the Message. It's related, however, to Shoot the Dangerous Minion. Can be combined with the related Uriah Gambit, when the message tells the recipient to send the messenger on a deadly errand. If you're playing a video game and your Player Character gets hit with this, you've just encountered one variety of Treacherous Quest Giver.