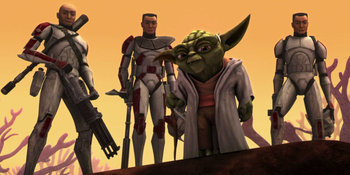 Jedi Master Yoda is on a secret mission to forge a treaty with the King of the strategic system of Toydaria when his ship is ambushed by Count Dooku. Yoda and three clone troopers must face off against Count Dooku's dreaded assassin Ventress and her massive droid army to prove the Jedi are strong enough to protect the king and his people from the forces of the Clone Wars so that Toydaria can join the Republic.