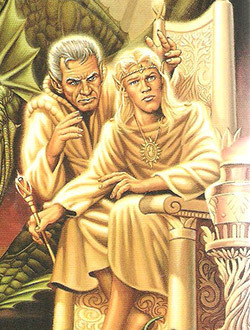 "The planet is being taken over by the Federation, but we don't want to come in here and use our muscle, you know what I mean? That ain't subtle. So what we do is we help one guy take over the planet. He pulls the strings, and then we pull his."
— Jim Kirk, Star Trek: The Original Series, "A Piece of the Action" note It's his solution to dealing with a planet of warring gangsters who don't understand Federation altruism.
Advertisement:

When the nominal leader of a nation — most commonly some form of royalty — is secretly a figurehead controlled by other elements, whether inside or outside the government. Usually the real power will be a Regent for Life, a scheming spouse, a Government Conspiracy, a Dragon-in-Chief, or a particularly skillful Evil Chancellor. On paper, the general populace will think that the nominal ruler is really the one in charge, but it could be an Open Secret even for them (if not the entire populace, then at least the nobility). As for how the monarch themselves might react, they may be trying desperately to get power back, may be content with the status quo as The Way Things Are Meant To Be, may be too busy having fun to care, or in some extreme cases may not even know themselves the extent to which they're being played. In some cases, this will be built right into the system of government, though only the highest officials will know that. Often the protagonists will help open the Puppet King's eyes and help him take his government back.

Does not apply to cases like most modern-day monarchies, where the true power lies in elected officials while the monarch is a ceremonial role whose only real job is spreading goodwill. The government has to at least make a show that the ruler is calling the shots to qualify for this trope. Has nothing to do with the Teen Titans villain Puppet King, who is an Evil Sorcerer with the body of a literal puppet, or puppets used that play the part of kings in Puppet Shows, or King Friday XIII from Mister Rogers' Neighborhood. Also not to be confused with Puppeteer Parasite or People Puppets.

Compare Shadow Dictator and Decoy Leader. An Apparently Powerless Puppetmaster is a subversion (looks powerless, but isn't, and takes advantage of that perception). A usually more mundane example may be a Clueless Boss. See also Our Presidents Are Different and Puppet State.

Queen of the Machine Empire

Amazon Killer becomes the new Queen of Machine Empire Black Magma, only to learn that's not the same as being its ruler.

Queen of the Machine Empire

Amazon Killer becomes the new Queen of Machine Empire Black Magma, only to learn that's not the same as being its ruler.