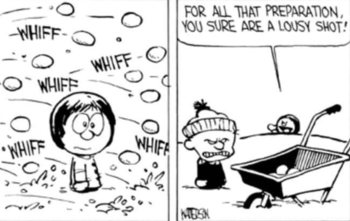 Some people have such atrocious aim that it becomes a joke that the safest place to be when they're shooting is where they're aiming at. Indeed, their projectiles (and these are by no means limited to bullets) may break the laws of physics to show how horrible their aim is.

To qualify for this trope, a specific character's lousy aim needs to be called out at least once and probably Played for Laughs. Doesn't necessarily need to be with a weapon.

Compare Imperial Stormtrooper Marksmanship Academy, when mooks contractually can't hit the hero except when Rule of Drama intervenes (because if they did, the story would be over), and A-Team Firing, when shootouts go on at length without anybody being hit. If the atrocious aiming somehow saves the day, then it overlaps with Saved by a Terrible Performance. Will often result in an Epic Fail. Contrast Accidental Aiming Skills.

Heavy tries to snipe a target, but misses. He then tries again, only to miss again and end up killing someone.

Heavy tries to snipe a target, but misses. He then tries again, only to miss again and end up killing someone.