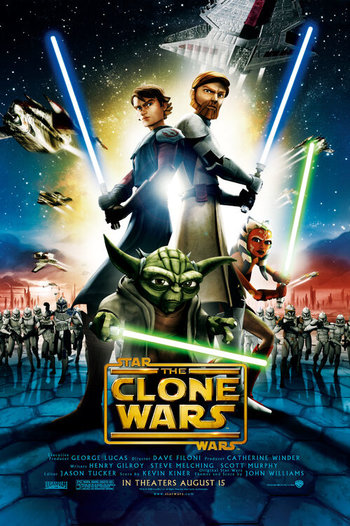 Star Wars: The Clone Wars is a CGI animated film set in the Star Wars franchise that takes place during the three-year time period between the films Attack of the Clones and Revenge of the Sith in addition to being the Pilot Movie of the television series (which later aired its first episode after this on October 3, 2008). It was also produced by Lucasfilm and distributed by Warner Bros. Pictures, which also held the home media distribution rights to the series as a whole. The film premiered on August 10, 2008 at the Grauman's Egyptian Theatre while screening in wide release on August 14, 2008 across Australia and August 15, 2008 in the United States, Canada, and the United Kingdom. The Clone Wars earned over $14 million in its opening weekend and went on to earn over $60 million worldwide. A major marketing campaign for the film included toys, fast food, and comic books.