Clones Are People, Too 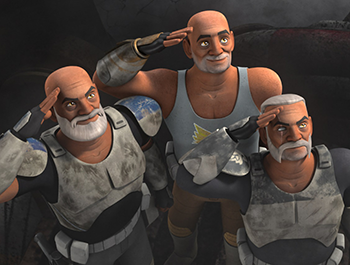 One's a model soldier, one's a total nut, and one's a Knight in Sour Armor. All three are badasses, all three are clones of the same villain, and all three are heroes. And they are all voiced by the same guy.
Plo Koon: Sergeant, why are you so certain no one is coming?
Sergeant Sinker: We're just clones, sir. We're meant to be expendable.
Plo Koon: Not to me.
— Star Wars: The Clone Wars, "Rising Malevolence"
Advertisement:

Clones have often gotten the short end of the stick in Sci-Fi. When they're not soulless abominations or evil dopplegangers, they tend to be seen as just back-up copies of the original and nothing more.

Except when this trope kicks in. After all, Nature creates genetic copies of people all the time. They're called identical twins; and as people in Real Life can easily tell you, they are very much individuals.* In fact, clones are less identical to the original than twins are to each other; twins have the same mitochondrial DNA, while a clone doesn’t have the same mitochondrial DNA as the original.

This trope is when a clone is permitted to be their own person and live their own life, essentially becoming a character independent from the original. They may grapple with Cloning Blues now and then, or they may recognize that their personality is sufficiently unique for them to think of themselves as — well, themselves. This is more difficult if they started life with the copied memories of the original. Often, they become a recurring or supporting character. If the original is dead, it's likely the clone takes over the original's role.

Expect any Zombie Advocate to take this viewpoint, but expressing this view does not automatically make a person a Zombie Advocate. See also Androids Are People, Too. What Measure Is a Non-Human? is when this trope is called into question or outright rejected and Death Means Humanity can lead to someone who views clones as lesser lifeforms to change their views to this trope.

Due to their nature as artificial humanoids, Gatlanteans are all cloned from similar genetic templates.

Due to their nature as artificial humanoids, Gatlanteans are all cloned from similar genetic templates.