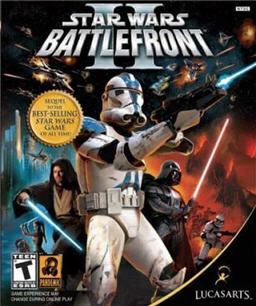 "Watch those wrist rockets!"
"My first day as a member of the 501st... It was hot, it was sandy, chaotic. Nothing at all like the simulations on Kamino. Of course that's pretty much the way it was for all of us, wasn't it? All that breeding, all those years of training... it doesn't really prepare you for the all the screaming or the blood, does it? Frankly, I'm still amazed we ever made it through the first hour, never mind the first day."
— Clone narrator
Advertisement:

For tropes on the 2017 game which has the same name, go here.

Star Wars: Battlefront II is a 2005 Star Wars Legends team first- and third-person shooter video game developed by Pandemic Studios and published by LucasArts. It is a sequel to 2004's Star Wars: Battlefront and the second game in the Battlefront series. The game was released in PAL regions on October 31, 2005 on the PlayStation 2, PlayStation Portable, Microsoft Windows, and Xbox platforms, and in North America on November 1 of the same year. It was later updated to be backwards compatible for the Xbox 360. It was also released on the PlayStation Store on October 20, 2009 for download on the PSP.

The game features new vehicles, characters, game mechanics, maps, and missions compared to the original Battlefront. Unlike its predecessor, Battlefront II features a more narrative-based campaign, retelling portions of the Star Wars story from the point of view of a veteran Imperial stormtrooper, reminiscing about his tour of duty in service of both the Galactic Republic and as part of the Galactic Empire. Gameplay additions over Battlefront include playable heroes, additional game modes, and objective-based space battles.

"Did we have any doubts? Any private, traitorous thoughts? Perhaps... but no one said a word. Not on the flight to Coruscant, not when Order 66 came down, and not when we marched into the Jedi Temple. Not a word."