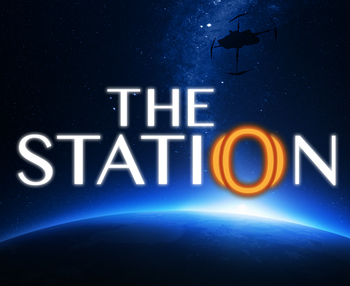 The Station is an Environmental Narrative Game, developed by a Canadian team also calling themselves The Station. It was funded

on Kickstarter in December 2016, and released on Playstation 4, Xbox One and PC through Steam on February 19th, 2018.
Advertisement:

It is set far enough into the future for Faster Than Light travel to have become commonplace, which eventually led to the discovery of an exoplanet with clear evidence of sentient alien life on it. Unfortunately, that evidence consisted of unmistakable signs of a large war, large enough to be detected from afar, which tempered hopes of a peaceful first contact. The titular research station, the Espial, was sent into their planet's orbit with a three-man crew in order to covertly observe the events on the surface. However, four days before the end of its mission, contact was lost with the Espial; worse is that the stealth systems onboard malfunctioned as well, exposing the station to the planet's inhabitants. The player, an unnamed recon officer, is sent to the station to establish what's going on and hopefully rescue the crew, before the alien leaders on the planet get the time to react and down the station or worse.

Not to be confused with The Final Station (which is about trains and a Zombie Apocalypse), or with Environmental Station Alpha (which is set inside an enclosed habitat on Earth.)

Note: This is a rather short game, so while some spoilers have been marked, reading the page before playing can nevertheless substantially affect your experience of the work!

Tropes present in The Station: