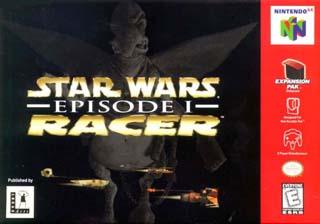 Two Engines. One Champion. No Limits.
For generations, the GALACTIC PODRACING
CIRCUIT has thrilled citizens of the Outer
Rim Territories with its fast and dangerous
contests of repulsor and turbine-driven
land vehicles.

Amid the ruffian and racing elite, one
champion stands above the rest. His name
is Sebulba, a cunning and ruthless pilot
who wins by any means necessary.

To challenge him, all the best Podrace
pilots gather on the desert planet Tatooine
for the legendary BOONTA CLASSIC
determined to claim the title of fastest
podracer in the Galaxy...
Advertisement:

Star Wars: Episode I: Racer is a Star Wars Legends Racing Game developped by LucasArts, released originally for the Nintendo 64 and later for PC, Apple Macintosh, Game Boy Color, Sega Dreamcast, Nintendo Switch, and PlayStation 4, based on the Podracing scene from The Phantom Menace.

Anakin Skywalker, Sebulba and 21 other Podracers compete on over two dozen different courses in a tournament which culminates in the Boonta Eve Classic race on Tatooine featured in the movie. Racing at speeds in excess of 600 mph can strain a Podracer's engines, but they can be repaired in flight, and pit droids will make repairs between races. Vehicle upgrades can be bought at Watto's parts supply house.